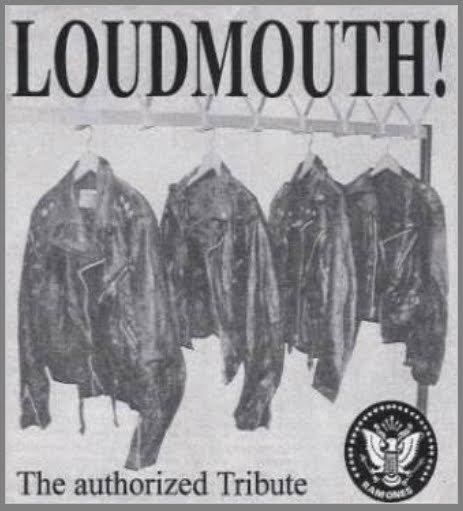 AN OFFICIAL FANCLUB-CD
Record contains 28 tracks plus 2 then unreleased Ramones-bonustracks that are all around the world now, after we first released it.
It were originally released in 1999 and were first presented at our third tributenight to Ramones. It is an by the band authorized official fanclub-sampler, with livetracks recorded at our tributes before (1994 and 1996) plus some (most exclusive) studiorecordings by bands who were involved in this two or in the 1999-tribute.
There are no copies left.
Only around 1500 were pressed (markable by the “little Loudmouth” and the original “Gema”-logo on the CD).

If you like to get a self-made CD (the price depends on the p and p to your country), get in touch.
We even can send the file via "wetransfer", but the company cuts the end of all songs for a moment (and we have no idea, why).
Tracklist:
1. Intro (The Nutley Brass Band)

6. The Boonaraaas: Oh Oh I Love Him So (Studio)

7. Arturo Bassick: I Wanna Be Your Boyfriend (Studio)

* Please note:
The bonustracks, demos to the Ramones-songs „Perfect Day“ and „Tomorrow Never Comes“ (first from a recording session in 1993, second from the “Adios Amigos”-sessions) were released on our sampler for the first time ever then and exclusively. The songs weren’t on any official release or any bootleg before our sampler came out. How we got this demos and by whom, will be a secret forever- promised is promised.
After our release the songs gone around the world (especially by the internet), exactly as we thought it would happen, but the original source are we and our sampler (you can hear it, because there are “special” endings on both songs, which are not on the original tape).It would be fair if everyone would say that, when releasing the songs whereever.