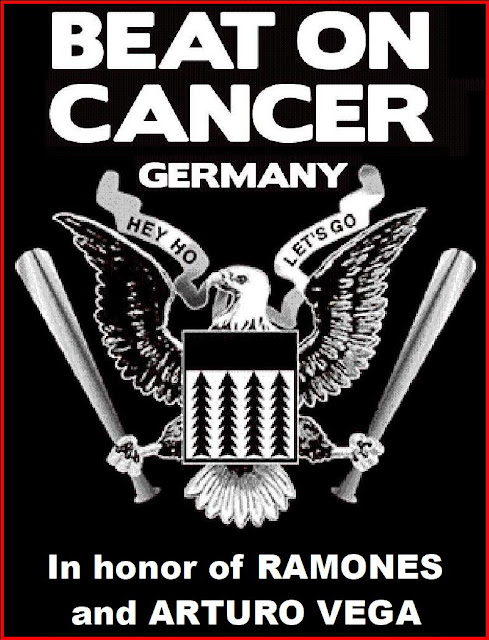 Interview with Jörg about Beat On Cancer
(in german language; from "Westdeutsche Zeitung", August 2012)

Beat On Cancer Germany is a presentation by Loudmouth!/now: Loud!Mouse and the german official RAMONES-Fanclub estd 1993, both based in Düsseldorf, and is a non-profit (private) action (not a registered association). All proceeds from our events goes to organisations working in the field of cancer research and/or -abatement and to hospices.

The name and the logo are created by ARTURO VEGA (RIP, 1947-2013), the artistic mastermind and light technician of RAMONES for all the band's carreer and we are allowed to use it with his friendly permission, exclusively for Europe. He started it on October 8, 2004 (the birthday of guitarist Johnny Ramone, who died on cancer earlier that year) and as also the band's singer Joey Ramone died on cancer (in 2001), we decided to do our next tributes to the gone and missed band (after we did four before in 1994, 1996, 1999 and 2004) as a benefit then, too.
We also cooperate in love and friendship with the annual ROCK TO CURE CANCER, founded by Kimmi and Marcia in the USA in 2009.

As of it was our 18th Anniversary in 2012 since the first RAMONES-tribute we did back on September 9, 1994, the first german BEAT ON CANCER-event took place on September 7 to 9 in 2012. The second one took place on September 9 in 2017.
Please notice that the right to use the (Ramones-) Beat On Cancer-Logo in and for Germany ix exclusively given to us by ARTURO VEGA (RIP) and Ramones-Productions, New York City/USA. Any using of the logo and the name in and for Germany, even for benefit reasons, has to be arranged with us and the original holders of the name’s rights. Only we are (still) allowed to do events under this name and with this logo. Any event which is not arranged with us and is presented under this name and with this logo is not officialized and is a violation of applicable laws.