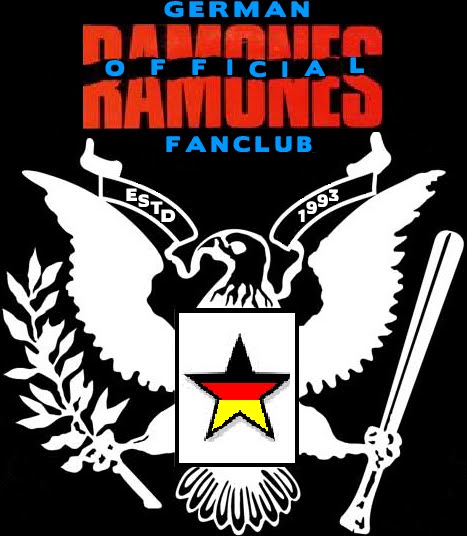 "If someone's gotta do it, it should be YOU guys!"
(Johnny Ramone, 10 December 1993)
Interview with fanclubfounders Christian and Jörg
(in german language; originally released in "OX"-Magazine No.125, April/May 2016)

Because of a fortunate coincidence, since 1989 our quite little group of german „Ramones-Followers“ were often behind, beside and on the stages, where the Ramones played, presented with the best sight to their shows. We were at many of their soundchecks, we talked with them. Sometimes we made sightseeing in the towns, where the band had to play, bought souvenirs with them, were out with them for dinner or lunch and sometimes (rare and only with individuals) out in the nightlife after their show. Many more times we sat together in their hotel with them, sometimes for hours, and talked. And once they were our guests for lunch at the house of one of us. No reason to be conceited- it’s just the way it was and it happened. We experienced the band as friendly, polite and really pleasant private people, in no way arrogant, who had a lot of interesting things to tell.  In early December 1993, whilst the band was on one of their european tours, and only a couple of months before their 20th anniversary, Christian and Jörg had the idea to release a special jubileefanzine, and also to do a tributeevent, to celebrate and to show our respect to our favourite band. They liked the idea from the beginning, and right then we were allowed to do all this as an “official” thing, even later on.

As Johnny Ramone said, see above...

The words about the whole story of/the complete history are under construction.
Home
Subscribe to: Posts (Atom)